See the Artist Biography of our own William “Buddy” Leonard at the Louisiana Folklife Center at Northwestern State University. 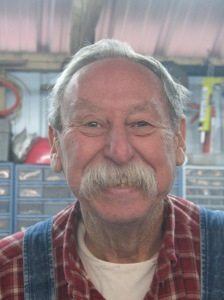 Buddy Leonard, a founding member of GCBA, retired in September 2009 after serving as President for 11 years.

Buddy began his career at the New Orleans Fair Grounds Race Course, cooling down horses and observing the work of the horse shoer. He later apprenticed for two years to a smith in Ohio where he learned and honed his skills.  Buddy eventually followed the racing season from track to track. He gained a reputation for being able to shoe the difficult horses and those no one else would tackle. There were many top trainers and celebrity owners among his clients.  Buddy retired from shoeing horses in 1987 and built a blacksmith shop at his home in Covington, La.

Buddy started teaching students to forge tools the way he was taught as an apprentice and continues to do so today. Other smiths began to meet at his shop and this led to the formation of our organization. Buddy has graciously provided our members with the use of his shop including forge, power hammer, welder and dozens of tools acquired over the years. In 2008 a new main forge was built and the shop was expanded, making five additional forges and anvils available.

We are grateful to Buddy and his wife Betty for their many years of service to GCBA and for accommodating us for GCBA monthly meetings.